Here at #RWChat we’re all about hearing other people’s stories, so we’ve invited Shea Standefer to tell us about her first novel, which started life in comic form.

Hi, I’m Shea! I’ve been invited to write about how I took my idea for a graphic novel and turned it into a fully-fledged, #PitchWars-ready manuscript!

When I was in college, I was heavily into the comic book scene and I spent a lot of time doodling my own short stories. One class in particular led me to illustrating a 30-page comic, which ended up being the basis for my current manuscript, DEFINING LINES. 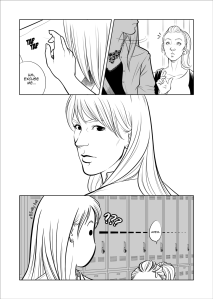 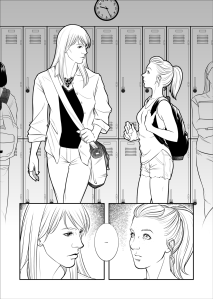 As I set about scripting the plot, I quickly realized I had much grander plans in mind. My outline went from six pages to thirty, and before I knew it I had about 20K words of a budding novel on my hands. Never having written a traditional book before, I ran with the idea and now I’m putting the finished touches on it just in time for #PitchWars!

I work professionally as an illustrator and art is still a very important medium for me to help visualize my ideas. I continued doodling pictures and pages from my manuscript throughout the writing process, and the pipe dream would be to eventually re-adapt DEFINING LINES into a graphic novel someday!

Shea Standefer is a freelance illustrator and #ownvoices writer. Her professional credits include work on popular franchises such as Star Wars, Doctor Who, and Firefly. When she’s not cosplaying or drinking copious amounts of coffee, she can be found speaking via interpretive .gifs on Twitter at @shea_standefer.